How do I know if I have a case due to accident caused by defective road or pavement? 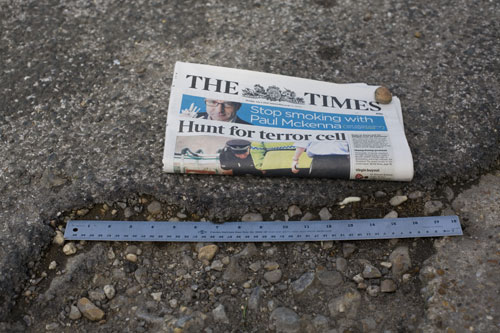 Section 41 of the Highways Act 1980 states that the highway authority has a responsibility to maintain roads at public expense in a fit state to accommodate the “ordinary traffic which passes or maybe expected to pass” along them. Therefore, a highway authority needs to take reasonable care of the road. There is no obligation to improve a highway, only to maintain it.

What must a court take into account?
The court must look at the following:-
(i) the nature of the road, ie. is it a main highway?
(ii) the standard of maintenance appropriate for the road;
(iii) the state of repair in which someone would have expected to it;
(iv) whether the highway authority could reasonably have been expected to know the condition of the highway, ie. have pot holes already been reported?
(v) where the highway authority could not have reasonable been expected to repair that part of the highway before the accident occurred, what warning notices of its condition had been displayed.

What is a Section 58 Defence?
Section 58 of the Highways Act 1980 gives a highway authority a defence that it will not be liable for an accident if it can prove that “such care as in all the circumstances was reasonably required to secure that part of the highway to which the action relates was not dangerous for traffic”.

So what must the highway authority show to avoid liability?
It must show that no amount of reasonable care could have prevented the defect. Highways do not have to be maintained to the same standards (ie. major and minor roads require different levels of inspection and repair), but the highway authority must know the character of the highway and the traffic reasonably expected to use it in order to decide levels of inspection and maintenance. For example, if a road is used by heavy lorries, this must be taken into account. Accordingly, there should be more frequent and detailed inspections of heavily used roads compared to a country road with less traffic.

In your claim for an accident caused by a defective road, you are entitled to ask for highway authority records of inspections, maintenance, complaints and accidents which will allow you to see if you have a case to progress.

Still got questions about an accident on a defective road or pavement?

Call me for a no-obligation consultation – and I will be happy to discuss all aspects of your personal injury claim to decide the best way to proceed.

I am a London-based solicitor and an expert in securing compensation for people who have been injured in accident caused by defective road that were not their fault. I work on a no win-no fee basis so you will never have to fund any part of your personal injury claim.