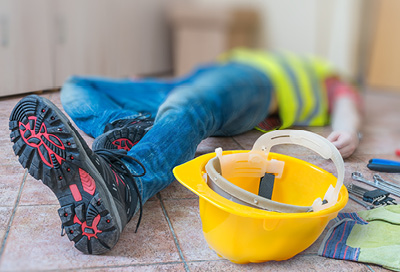 Goodge Law acted on behalf of a client in an accident at work claim.  He was working as a bricklayer on a building site with a company which was subcontracted to a main building contractor.

What happened to instigate an accident at work claim?

The man was employed in constructing the inside layer of the outside wall. Once the wall reached a certain height, a scaffolding platform known as a “bandstand” would be constructed in order to allow him to continue laying bricks as the wall increased in height.

He was instructed to begin working on a stretch of wall which already had a bandstand built next to it by his employers. The bandstand was about one metre high. There was no little ladder next to the bandstand and he ascended by walking up a sloping plank, putting his knee on the plank and hauling himself up onto the bandstand. 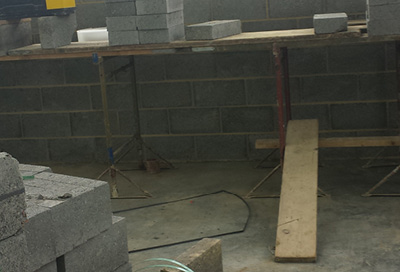 Whilst putting his knee on the plank in order to lift himself back up onto the bandstand, his weight bore down on the edge of the plank causing the long edge of the plank nearest the wall to tip back towards him. The man fell backwards onto the concrete floor which broke his arm, wrist and hand.

We pursued the bricklaying company who were the client’s employers.

What did the insurers say about the workplace accident?

The insurers disputed liability (responsibility) on the basis that the main contractors had control of the site with responsibility for all materials, work equipment and risk assessments.

They also argued that our client used a wheelbarrow to access the bandstand, rather than fetching a ladder, which had been previously used and was easily available.

What did we advise in the accident claim?

We advised our client that his employers were likely to be found liable for his injuries in two ways: as his employer and under the Occupiers’ Liability Act 1957.

We advised that an employer’s duty is to take reasonable care for the safety of the employee. They may be liable either vicariously through the negligence of another employee or through being personally in default of their duty of care.

We also advised our client that his employers had a duty to provide a safe place of work, including a safe means of access and to provide and maintain adequate plant and appliances under the Construction (Design and Management) Regulations 2015. They, therefore, had a duty to provide our client with a reasonably safe scaffolding structure from which to work and lay bricks. The bandstand should also have been provided with suitable and sufficient safe means of accessing it.

His employers were also required, under the Management of Health and Safety at Work Regulations 1999 to conduct a risk assessment of the risks of the health and safety of employees.

Furthermore, not only had the employers provided a bandstand which was inadequate, it also failed to provide any other equipment which might have prevented our client from falling, such as a safety harness, fencing around the bandstand or a suitable access ladder for the bandstand with suitable handrails or guards. None of this was provided.

The Work at Height Regulations 2005 also applied as our client was “working at height” and the bandstand fell within the “working platform” definition. The employers did not undertake a risk assessment, take suitable measures to prevent our client falling, provide a working platform of sufficient strength and rigidity or organise a regular regime of inspections to inspect the bandstands when they changed positions.

We also advised our client he would have a claim under the Occupiers Liability Act 1957 as his employers had control over the premises to ensure their safety. Accordingly, the employers would be an “occupier” and our client would be a “visitor”. The occupier’s duty is to take reasonable steps to ensure that visitors are reasonably safe when visiting the site.

What was the outcome of the accident at work claim?

Unfortunately, no offers of settlement were forthcoming in negotiation. Accordingly, it was necessary to commence court proceedings.

In the court documents, we drew the employer’s insurer’s attention to multiple breaches which led to a significant out of court settlement in the sum of £20,000 for injuries as well as the loss of earnings for our client’s entire absence from work and his out of pocket and medical expenses.

Goodge Law are specialists in workplace personal injury claims and can be contacted for a no-obligation phone consultation. If you or a family member has been involved in an incident that you do not believe was your or their fault, we can advise if a claim is viable.

We work on a no win-no fee basis so you will never have to fund any part of your claim. Click here to start your accident at work claim.